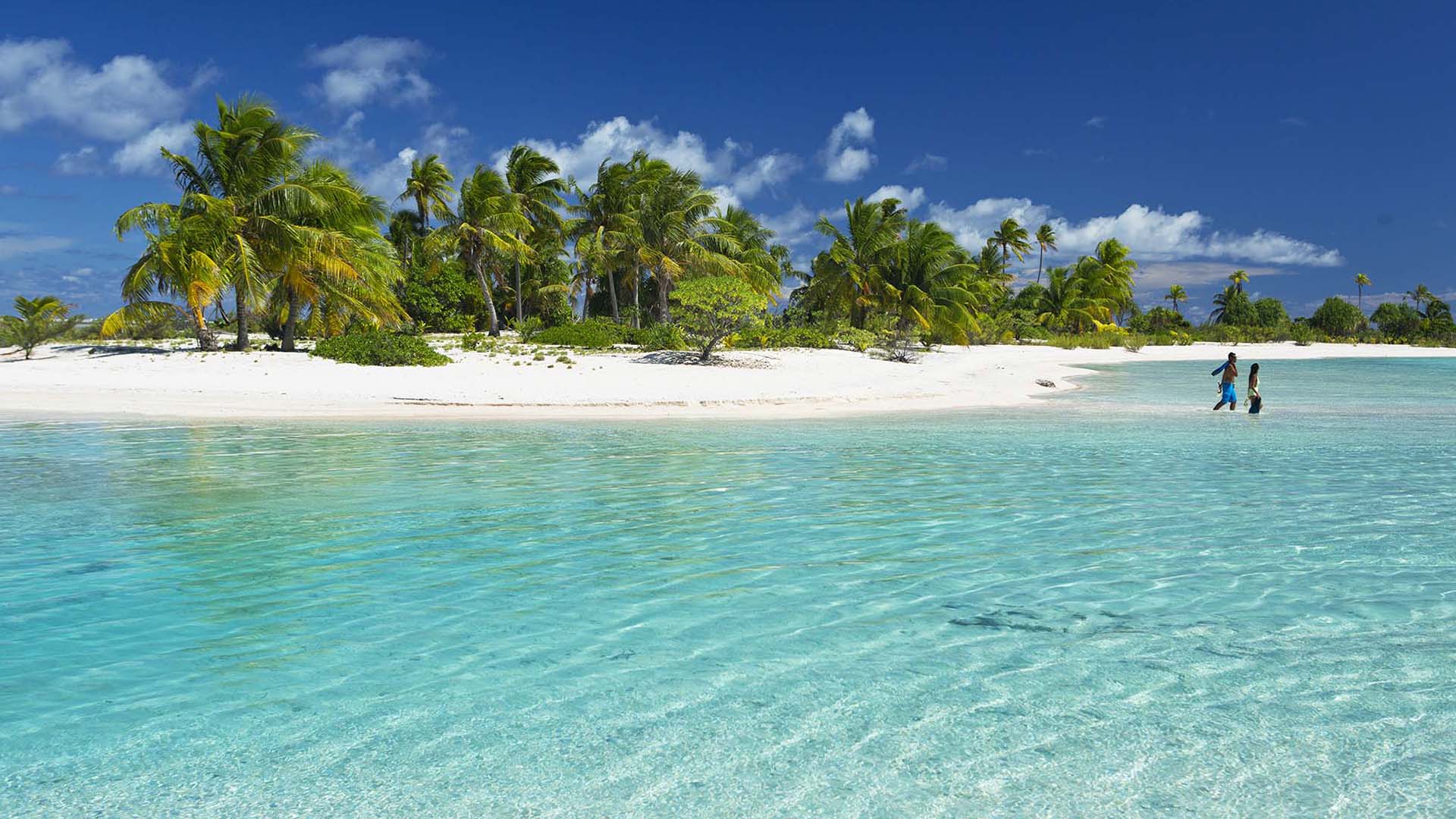 Tikehau encapsulates the meaning of going off the grid. This small, cherished atoll consists of countless tiny white and pink sand islets engulfed in coconut groves and hidden alcoves. In Tikehau, which actually means "peaceful landing," you will find nothing but absolute serenity on her calm and graceful shores.

Tikehau is a small, circular atoll neighboring Rangiroa in the Tuamotu Archipelago. The lagoon, formed by an almost unbroken ring of continuous coral, resembles an immense natural swimming pool. At only 16 miles (25 kilometers) across and no more than 100 feet (30 meters) deep, this underwater aquarium is teeming with marine life. According to the legendary marine researcher Jacques Cousteau, it has a higher concentration of fish than any other lagoon in French Polynesia.

As you can imagine, diving and snorkeling are the two main attractions in Tikehau. The best diving is found on the western shore around the Tuheiava Pass, the only navigable entry into the lagoon. You will encounter reef sharks and the occasional manta ray, but the appeal here is the enormous population of colorful fish. Some of the more common species include tuna, snapper, barracuda, lionfish, clownfish and parrotfish. 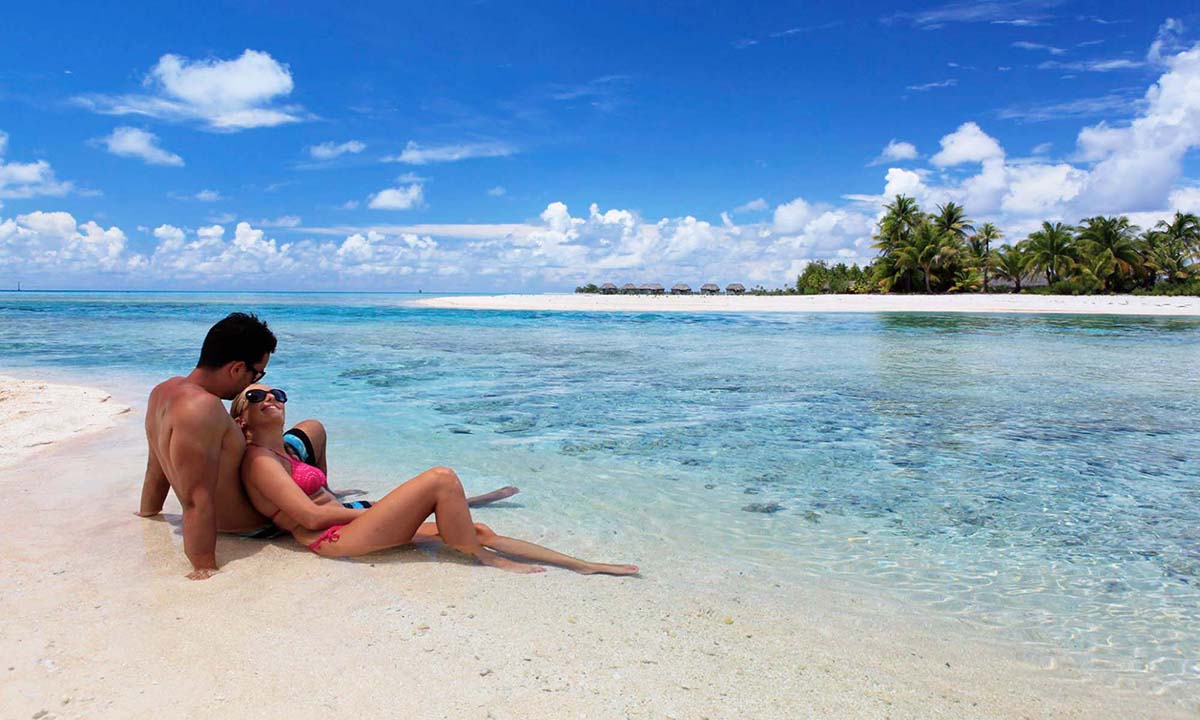 Immerse yourself in the vibrant colors of French Polynesia's islands with this 7-night vacation package to the islands of Bora Bora and Tikehau. Package includes international airfare, inter-island air, daily breakfast, 1 night at the Tahiti Pearl Beach Resort, 3 nights in a beach villa with pool at Le Bora Bora Resort, 3 nights in a beach villa at the Le Tikehau Resort, excursions, and more. 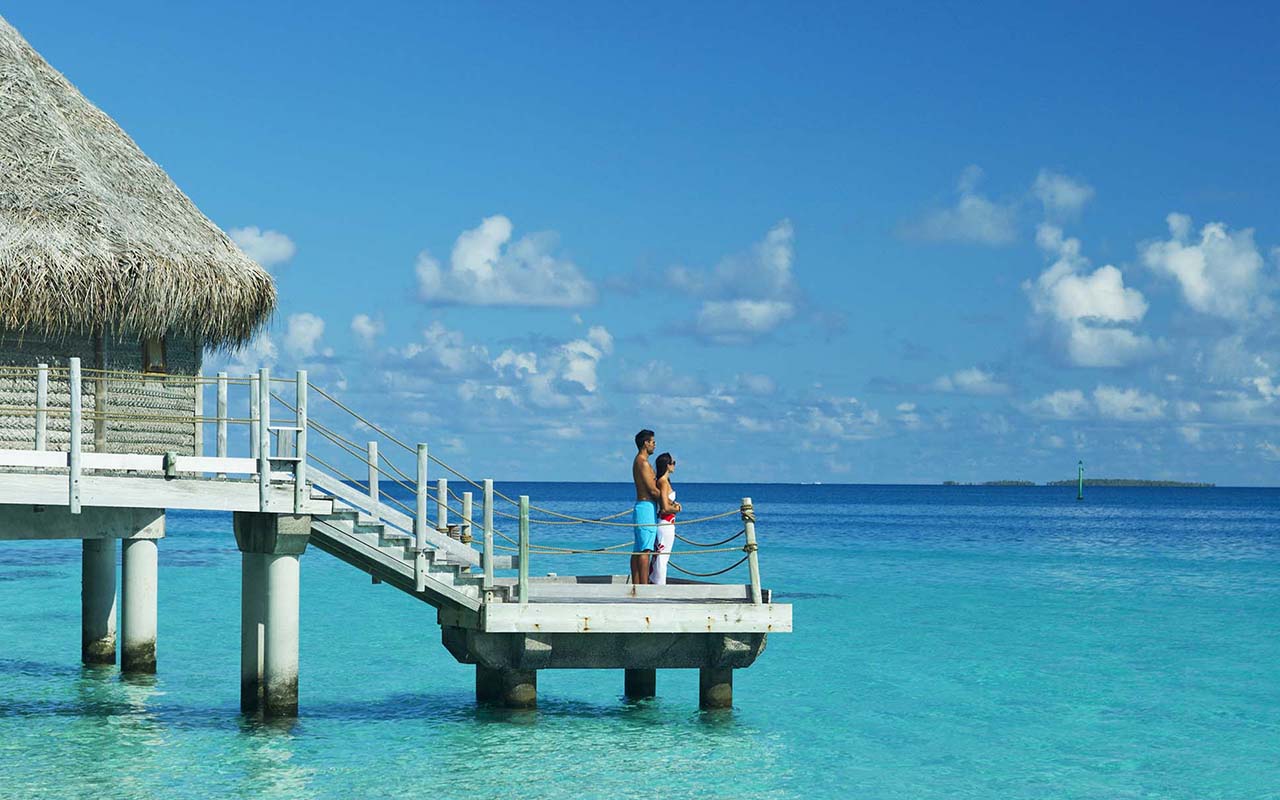 Aside from a few pensions and guesthouses, there are two resort accommodations in this remote locale: The Tikehau Pearl Beach Resort & Spa. Located at the southeast end, it offers a selection of beach and overwater bungalows. It also serves as a great hub for any and all leisurely activities including kayaking, snorkeling and biking. It even has its own dive center, making it easy to arrange your daily excursions. Alternatively, the seven bungalow Ninamu Resort is the ultimate paradise for the water sports enthusiast. On the eastern side of Tikehau, a large vacation home is available for rental. Tikehau Fafarua Lodge is ideal for families and larger groups traveling together with three airy and well-ventilated bedrooms and a private island to enjoy as you wish. Surrounded by lush coconut groves and and white coral beaches, experience the luxury of exploring Tikehau's unspoiled natural beauty at your leisure. 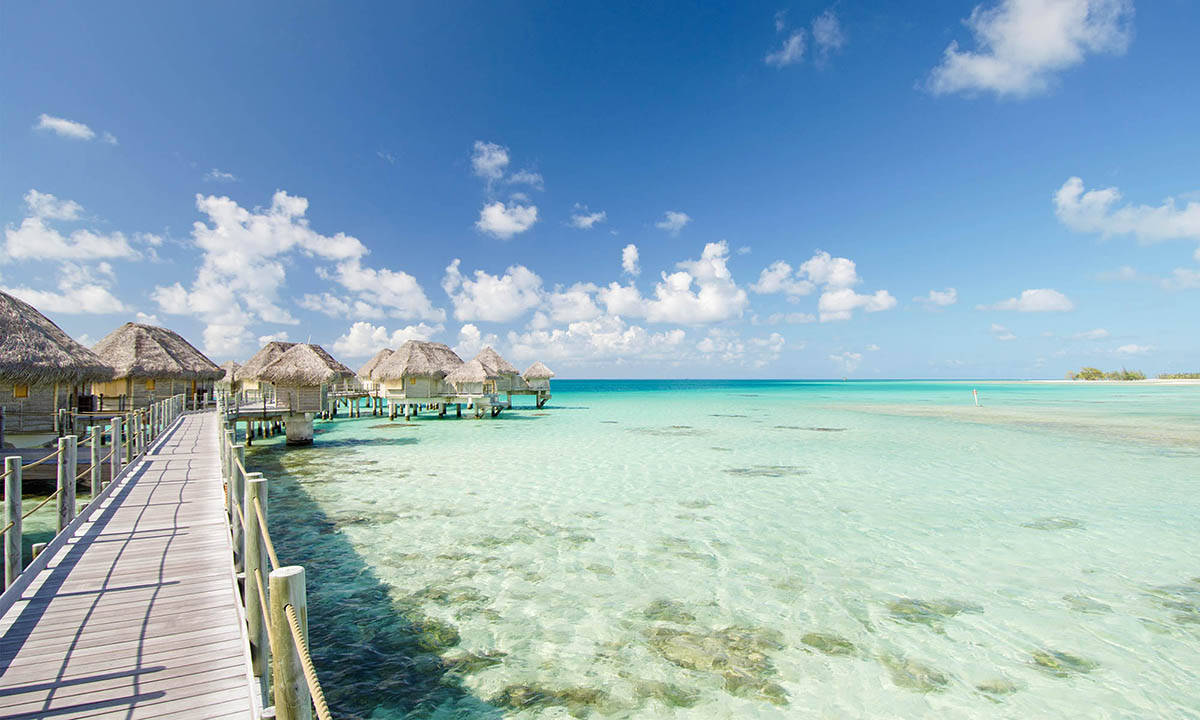 Le Tikehau, by Pearl Resorts can be found on a secluded, pink beach fringed with palm trees at the southeast end of the atoll. Located fifteen minutes by boat from the airport and the main village of Tuherahera, this hotel serves as the ideal home base for any and all leisurely activities including kayaking, snorkeling and biking. It even has its own dive center on site, making it easy to arrange your daily excursions. 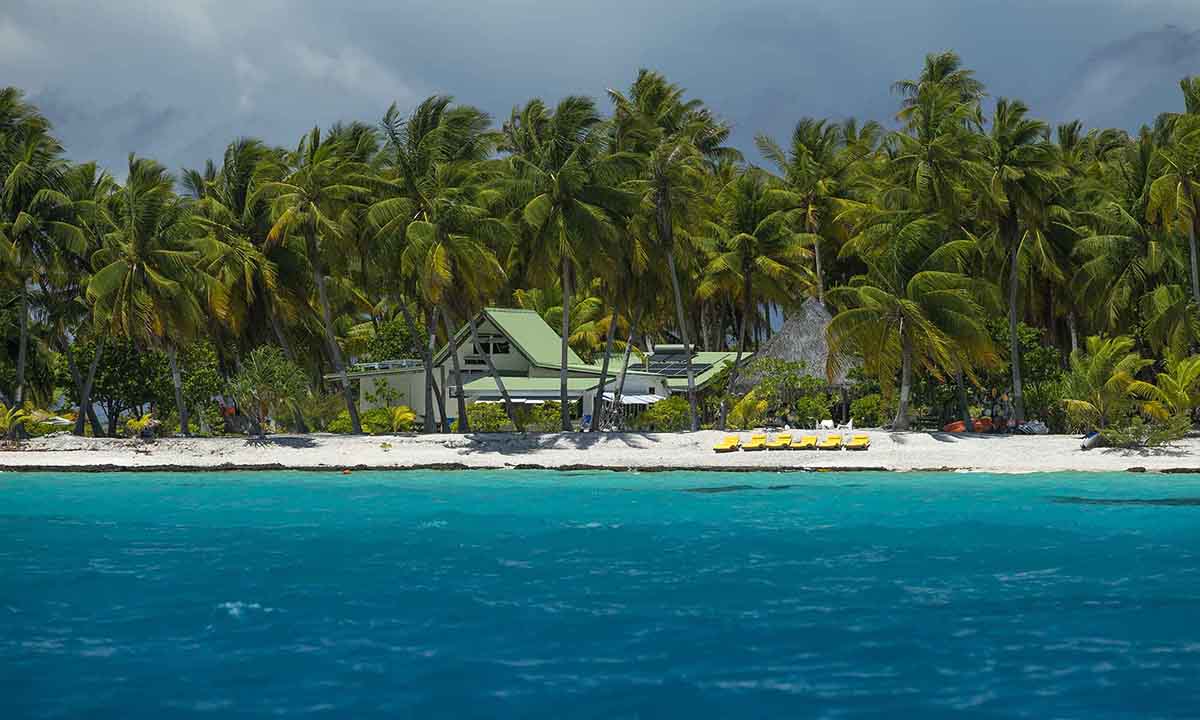 Tikehau Fafarua Lodge is a vacation home on a pristine private motu on the eastern side of Tikehau. Located thirty minutes by boat from the airport, this large house fulfills any private island vacation fantasy. Surrounded by lush coconut groves and white coral beaches, you will enjoy the luxury of exploring Tikehau's unspoiled natural beauty at your leisure with exclusive use of this idyllic motu. 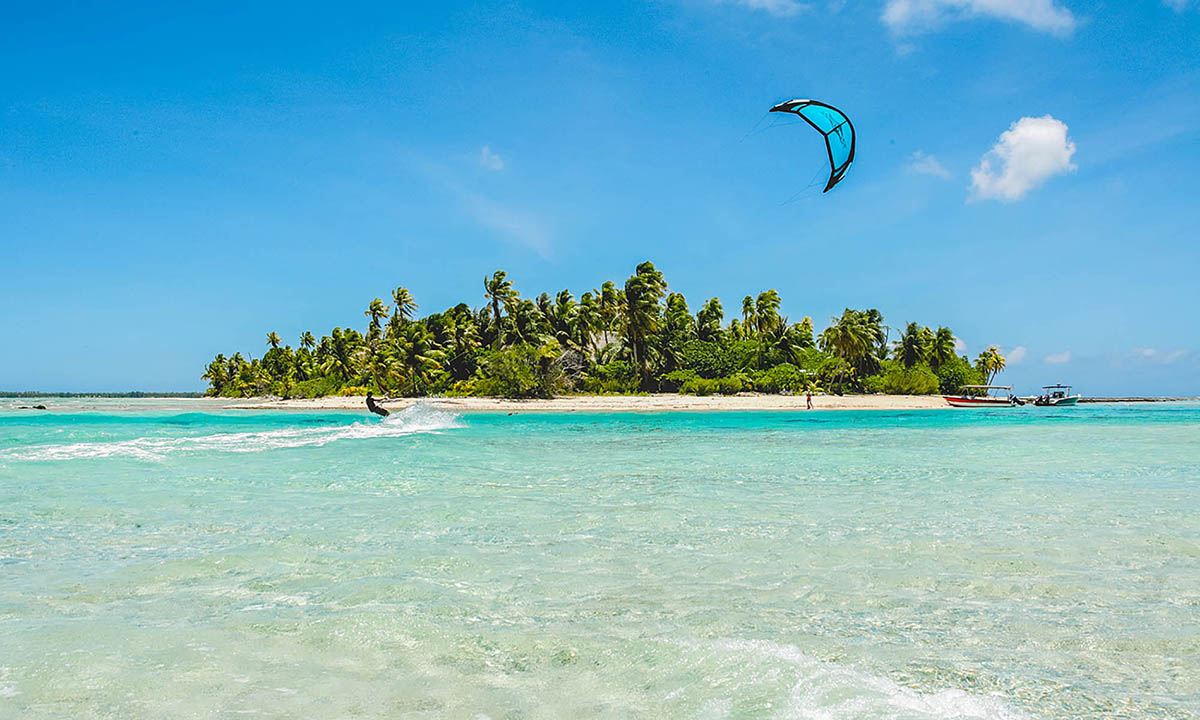 The Ninamu Resort is hidden away on a private island in the southwest corner of Tikehau, just five minutes by boat from the airport. Surrounded by pink sand beaches, abundant marine life, impeccable waves and prevailing trade winds, this secluded retreat is the ultimate paradise for every type of water sports enthusiast. It caters to divers, surfers, fishermen, stand up paddlers and kite boarders. 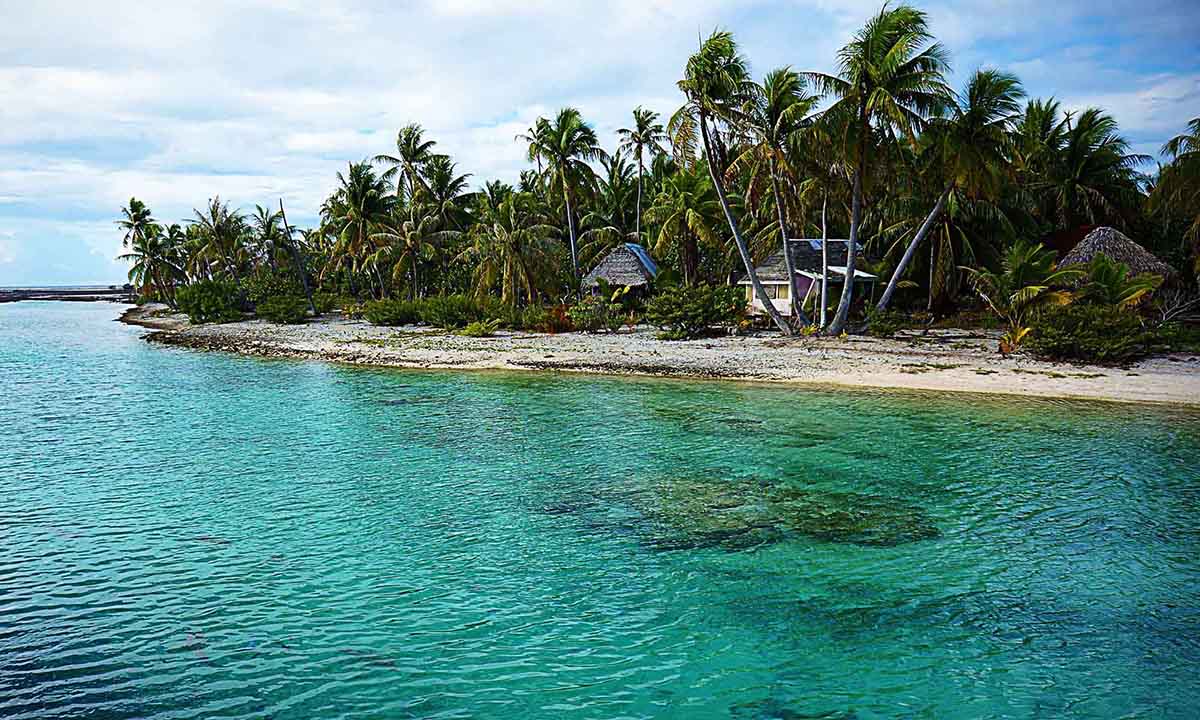 Relais Royal Tikehau is a quaint family-owned B&B-style lodge located on a private motu that is just a 5-minute boat ride away from the airport. This intimate Tikehau retreat features only nine bungalows and provides an immersive Polynesian experience for all guests. Surrounded by a small channel and a white and pink sand beach looking out to the lagoon, the views at every turn are absolutely stunning. 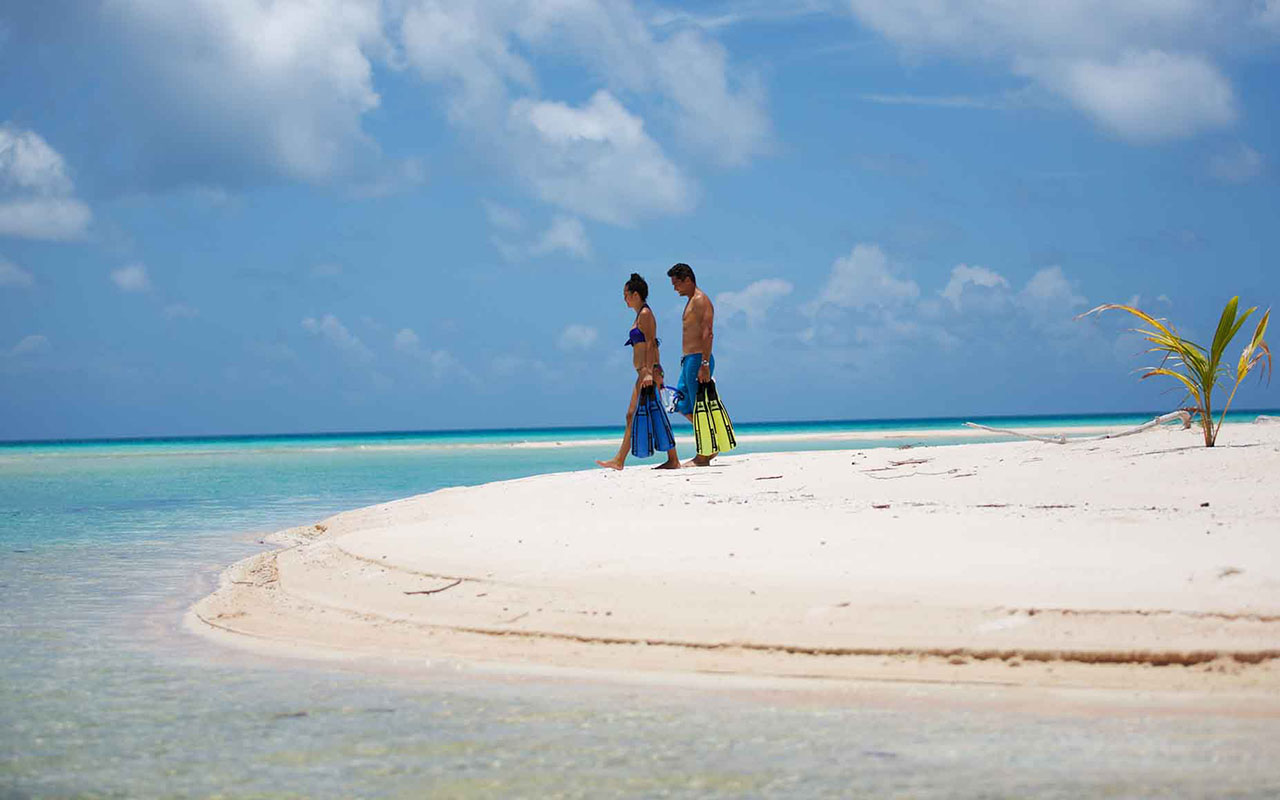 The underwater population greatly exceeds the number of inhabitants on land. Thus, fishing is the primary source of food and income for the nearly 500 local residents in Tikehau. You can visit one of the family-owned fish farms where they trap different species of fish in a maze of underwater fencing. Much of their catch is then shipped to Papeete and sold at the local markets.

The islanders are grouped in the main village of Tuherahera at the southern side, leaving the remainder of the atoll virtually untouched. In fact, the northeastern quarter is mostly uninhabited. There is a small dirt road that encircles the main islet around the village, perfect for a scenic bike ride. Naturally adorned with colorful flowers such as hibiscus and bougainvillea, Tuherahera is one of the most attractive villages in the Tuamotu Atolls.

Tikehau also has some of the best beaches and secluded islets in the region. On the eastern side of the atoll, there is a long, curving beach covered in pink sand. You can easily wade in the water and snorkel from one islet to the next. You can also take a boat into the middle of the lagoon and visit Motu Puarua at the northeastern end. This small islet, known as Bird Island, is a natural aviary for numerous colonies of nesting sea birds.