The island equivalent to the Garden of Eden, Huahine is an immense tropical jungle thriving with coconut plantations, vanilla orchids, banana groves, breadfruit trees and watermelon fields. Beyond its lush landscapes and bright blooms, Huahine is also a culturally preserved sanctuary with sacred temples hidden throughout dense vegetation. Undoubtedly, this island will leave you spellbound.

Part of the Leeward Group of Society Islands, Huahine is a 40-minute flight from Tahiti and rests in close proximity to Raiatea, Taha'a and Bora Bora. The island is divided into two parts: Huahine Nui (big) and Huahine Iti (small). The name Huahine, a variation of the Tahitian word vahine (woman), presumably refers to a mountain ridge resembling the outline of a pregnant woman—a symbol of the island's irrefutable fertility.

Huahine is exceptionally green—perhaps with envy, since fewer travelers frequent her sandy shores and lush hillsides than her favored counterparts, Moorea and Bora Bora. For this reason, though, Huahine has retained the alluring essence and authenticity of early Polynesia. The locals pride themselves on preserving what they genuinely believe is the most picturesque island in Tahiti; and our clients who visit often find that Huahine becomes their favorite island, returning again and again to find the same landscape still unchanged over time.

This natural abundance blends seamlessly with a wealth of ancient history and mythical intrigue. Once the home of Tahitian royalty, Huahine is considered the cradle of Polynesian culture. The island maintains the largest concentration of ancient marae (temples) in French Polynesia, some of which are believed to date back to the original ancestors of the Tahitians—the Lapita people—around 700 AD. 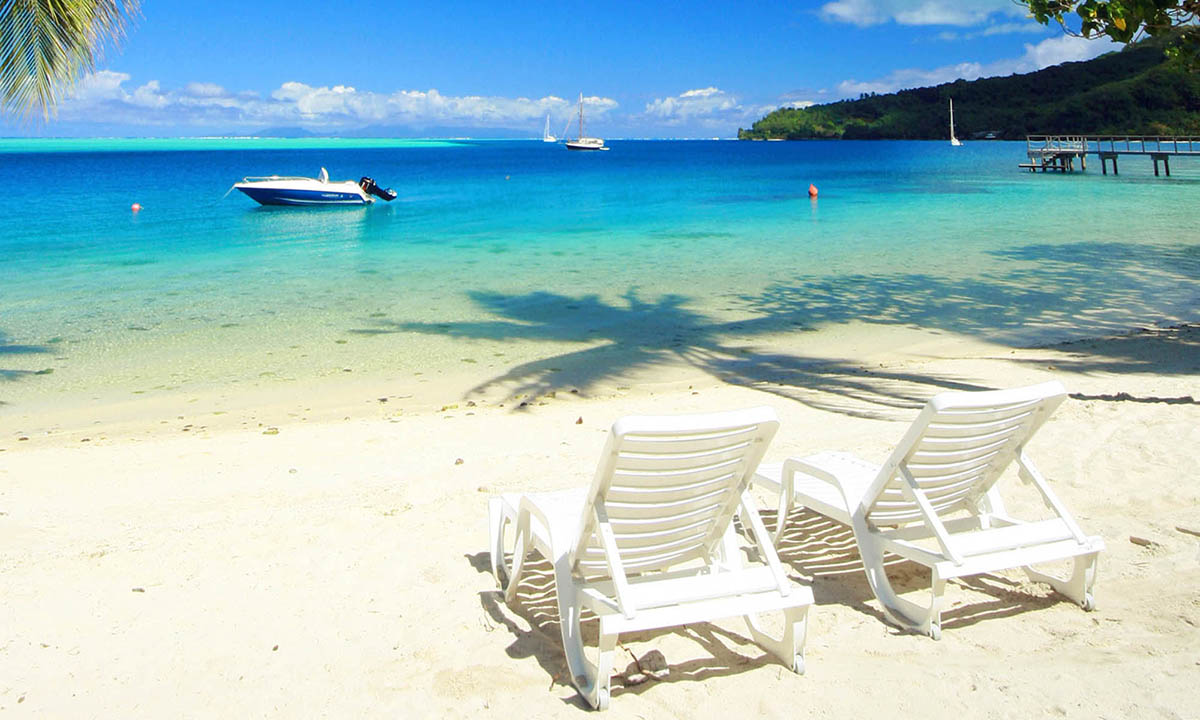 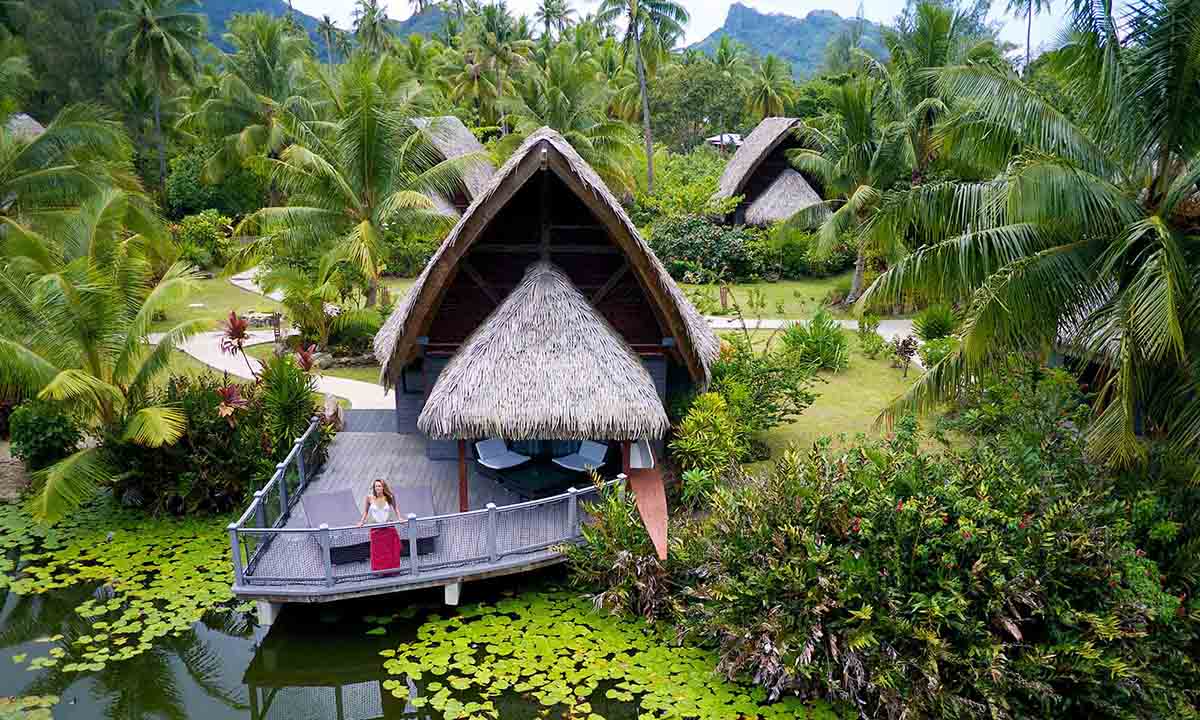 Embark on an adventure on the lush and culturally captivating island of Huahine in a Premium Garden Bungalow at the Maitai Lapita Village Huahine with free daily breakfast and dinner. Includes round-trip international air from select California cities, all transfers and inter-island air, a Tahiti Circle Island Tour, a 4x4 Huahine Island Tour, Jet Ski Tour, 3-in-1 Motu Picnic and Lagoon Tour, personal concierge service, and a private driver with restaurant reservations of your choice on your final evening in Tahiti before your international flight home. 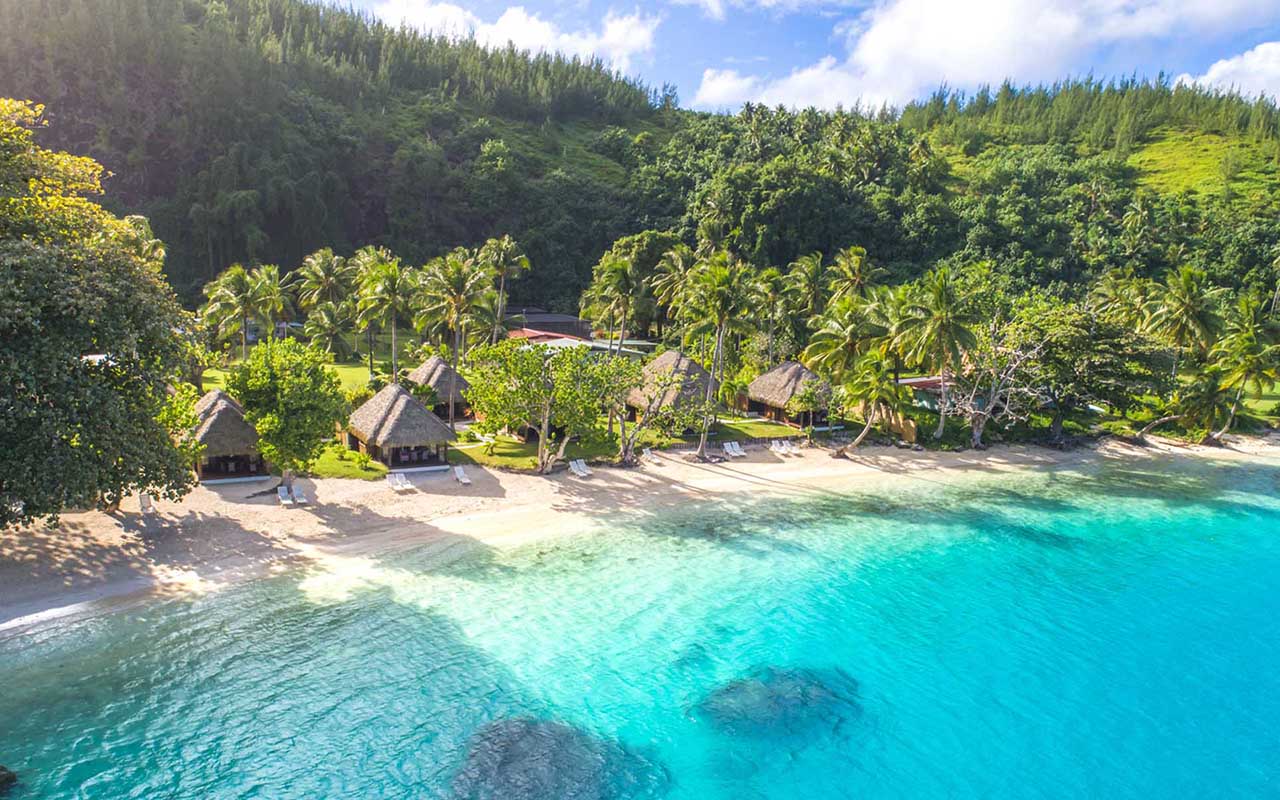 There are three distinctively unique hotels on Huahine. The first is the simple Royal Huahine Resort, located on the western side with overwater bungalows facing Raiatea and Taha'a on the horizon. Accessible only by ferry from Fare, it has a remote offshore feel although still part of the main island. The second is the lakeside Maitai Lapita Village. This charming resort was built around a carefully preserved ancient village and has its own dedicated museum in the hotel lobby. The third is the beachfront Relais Mahana, located on the southern tip of Huahine Iti in a protected inlet.  Known for its outstanding chef, this lovely liitle resort is a popular stop for sailors navigating French Polynesia. All three are charming options; but if you seek a non-resort experience, there are also a few small establishments known as pensions scattered around the island. 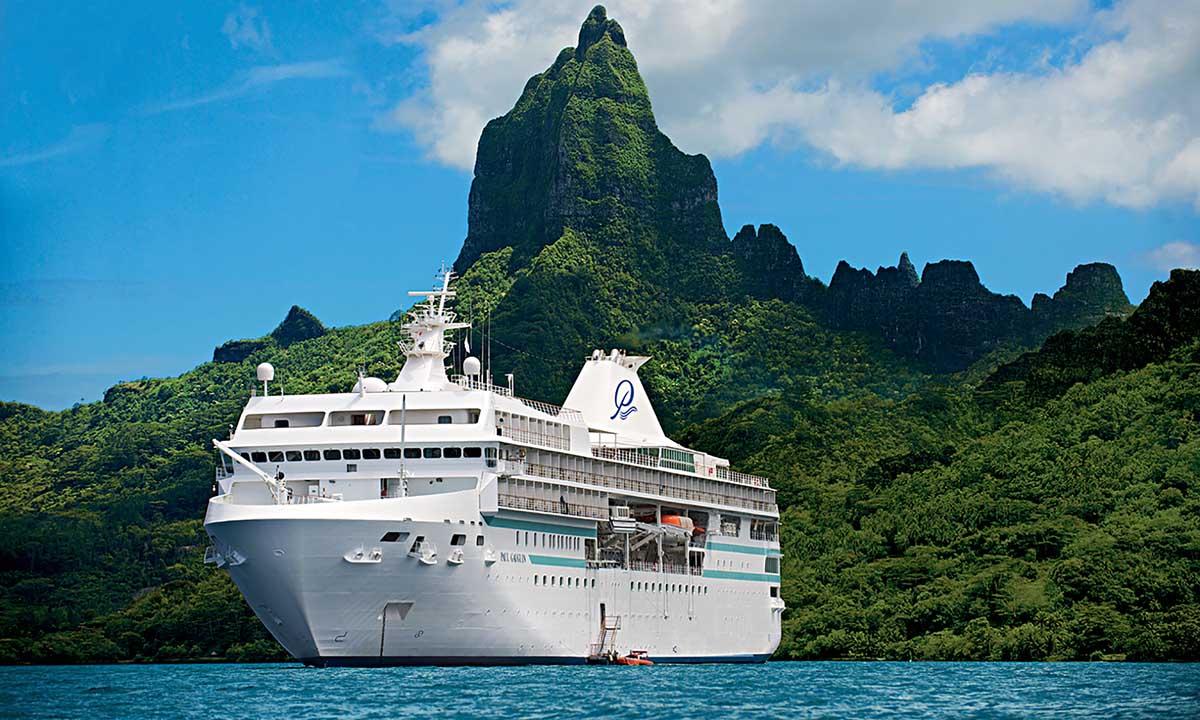 Designed specifically for Polynesia, the Paul Gauguin is a deluxe vessel offering all-inclusive small-ship luxury to just 332 guests. Flawless, friendly service from a European-trained staff emulates the delightfully unhurried and unregimented Polynesian way of life. Spacious ocean-view staterooms, most with balconies or verandas, open to sweet-scented tropical breezes and lush island vistas. Fine international and French cuisine is served on an open-seating basis in three restaurants. Polynesia's translucent, shimmering aqua lagoons are begging to be explored and there is no better place to do so than from the Paul Gauguin's retractable watersports marina. 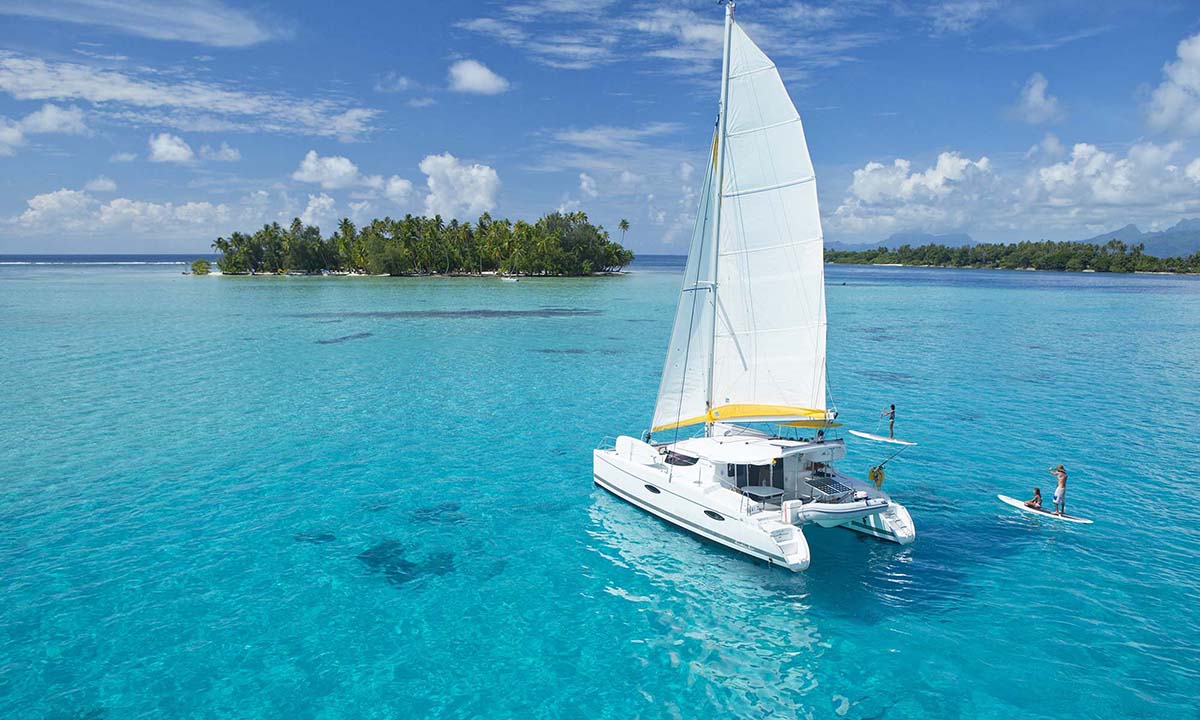 Experience the luxury of private yacht cruising in Tahiti with custom cruise itineraries through Bora Bora, Raiatea, Taha’a and Huahine aboard your own private catamaran. Enjoy secluded white sand beaches, stop at a remote motu and swim in translucent lagoons – the beauty of Tahiti Yacht Charter is you can do as much or as little as you want. The crew will tailor your sailing experience to your desires, taking into account the type of catamaran, the season and the duration of your cruise. The fleet of 30 modern and luxurious catamarans can accommodate anywhere from two to twelve people. Each is equipped with two kayaks, two floating hammocks, dinghy, snorkeling and fishing gear. 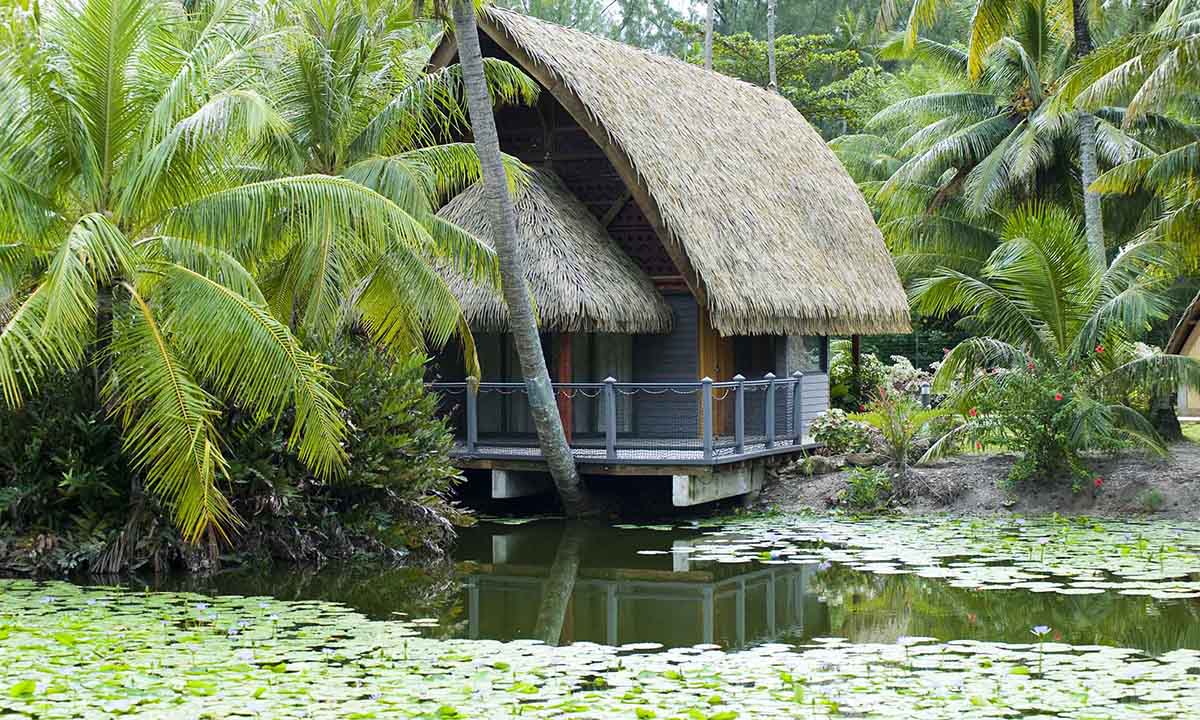 The lakeside Maitai Lapita Village is a charming resort built around a carefully preserved archaeological site on the western shore of Huahine. Located walking distance away from the main village of Fare, this hotel combines convenience with lush scenery and a unique sense of character. The hotel's historic surroundings tell a special story, while a museum in the lobby is dedicated to the history and culture of the island's original ancestors.

Hotel Le Mahana Huahine is located in the heart of Avea Bay on the west coast of Huahine Iti and just a short distance from the village of Parea. Although farther from the airport than the other hotels on the island, it has a great location with its own private, white sand beach and coral garden right in front of the hotel. 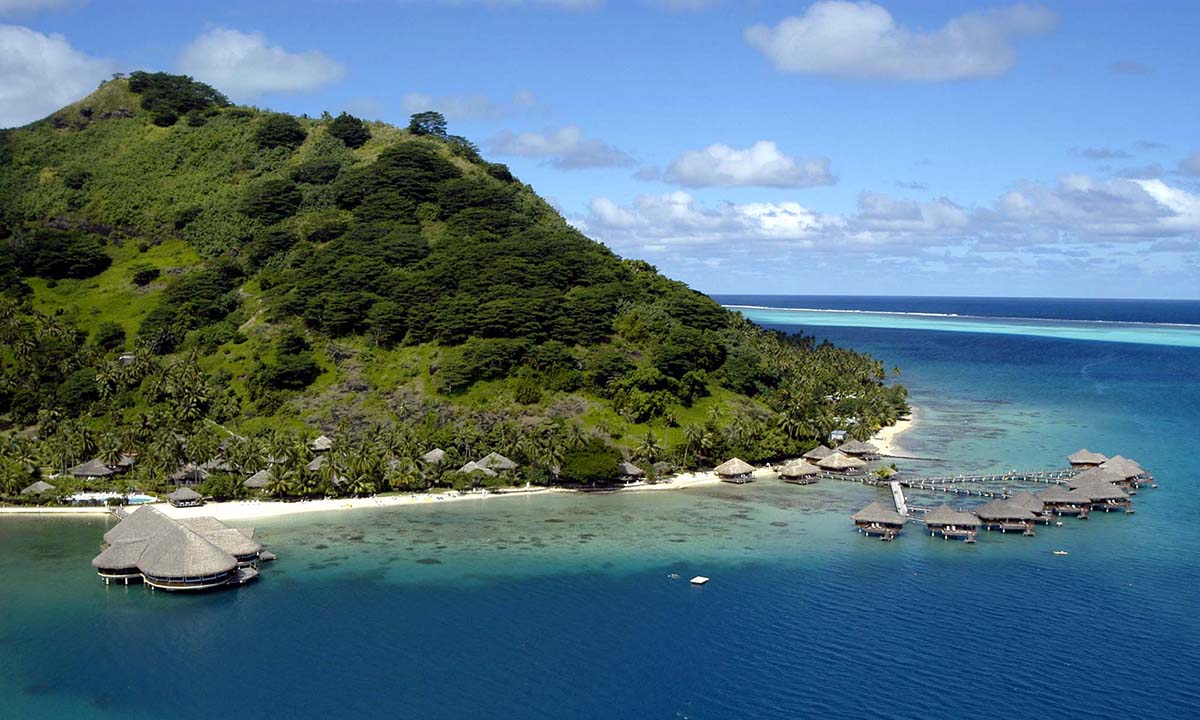 The secluded Royal Huahine is located on the western coast of Huahine, facing the neighboring islands of Raiatea and Taha'a on the horizon. Accessible only by boat from Fare, it has a remote offshore feel although still part of the main island. This is the only hotel on Huahine with overwater bungalows, providing an ideal retreat with great snorkeling off your own private deck.

Generally speaking, the natives appreciate a quiet lifestyle; but Huahine is still a very active island. The main town of Fare springs to life on Sunday mornings when the outdoor market brings truckloads of fruit and produce to the waterfront. Every year in October, the Hawaiki Nui Va'a, the largest outrigger canoe race in the South Pacific, starts from the island of Huahine. On that special day, the air is filled with excitement and intense electricity.

Popular water activities in Huahine include Marc`s Motu Picnic, Jet Skiing, 4x4 Tours, sailing and sport fishing. The island also has some of the best surf in the South Pacific, particularly at Ava Mo'a Pass near the reef in Fare.

Feeling creative? Journey through the expressive side of Huahine life and discover the fine artistry of Melanie Shook Dupre. Inspired by the surrounding lush Polynesian landscapes and lifestyles for over 39 years, Melanie gracefully captivates island life through her paintings and portraits. A true visual charm, "Galerie 'Umatatea", located in Maeva, Huahine is a must see. 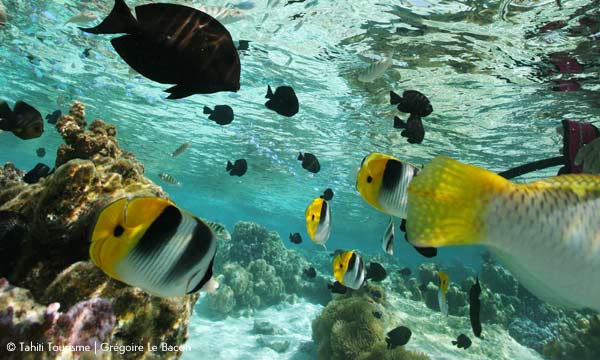 View a variety of marine life in the shallow lagoon waters. After a brief safety demonstration, you will be able to view these animals from an observation platform or you may choose to descend underwater for a close-up encounter with these friendly lagoon inhabitants. Operates: Everyday 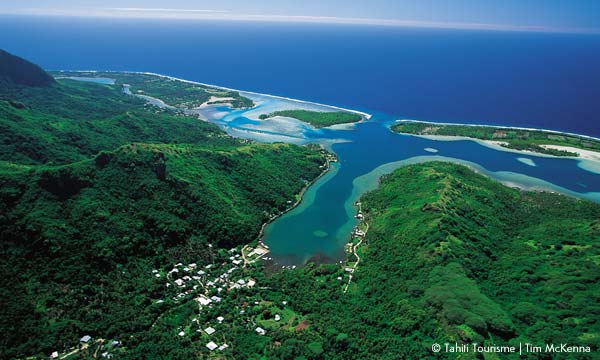 Explore the island of Huahine on this 4x4 island tour. Start by visiting Fare, the main town of Huahine, followed by a visit to the village of Maeva where you'll tour the ancient Marae (archaeological sites). You'll then continue on and visit a vanilla plantation and then have a chance to see and feed the sacred blue-eyed eels of Faie. You'll end the tour with a stop for a panoramic view at the Belvedere lookout point. Fruit and soft drinks are provided on the tour. Tour requires a minimum of 4 persons to operate. Operates: Everyday 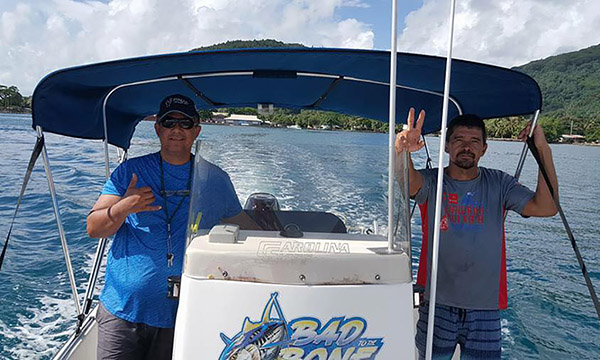 Take to the sea and discover the bountiful waters off of Huahine's shores with a guided lagoon fishing tour. Whether you are experienced or a beginner, this guided tour is ideal for any fishing enthusiast. Enjoy a leisurely day on the water catching local specialties such as wahoo, mahi mahi and more. Excursion includes all necessary equipment and a picnic lunch. Operates: Everyday 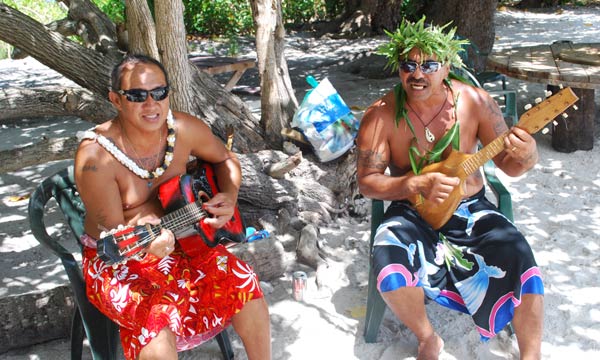 Journey aboard an outrigger canoe and explore the lush island of Huahine Iti and its lush surroundings. You will visit the island`s only black pearl farm, snorkel through vibrant coral gardens and enjoy a thrilling shark feeding excursion. You will also stop to have a picnic lunch and try the island`s signature dish, poisson cru. Operates: Everyday 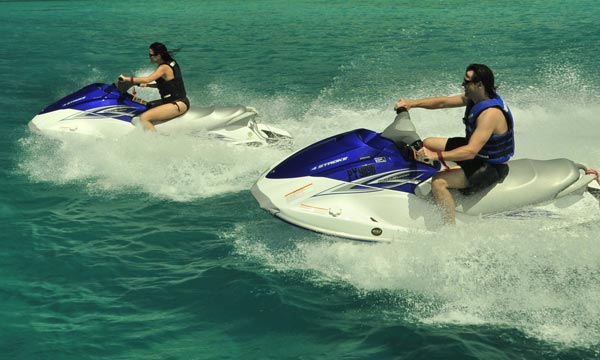 Enjoy a thrilling Jet Ski ride across Huahine`s blue lagoon. Accompanied by an experienced guide, you will cruise the shallow waters and snorkel at various stops around the island, encountering stingrays and perhaps even a few reef sharks. This tour includes snorkeling, a visit to a coral garden, and a stop at a motu for a cocktail and fruit. Operates: Everyday 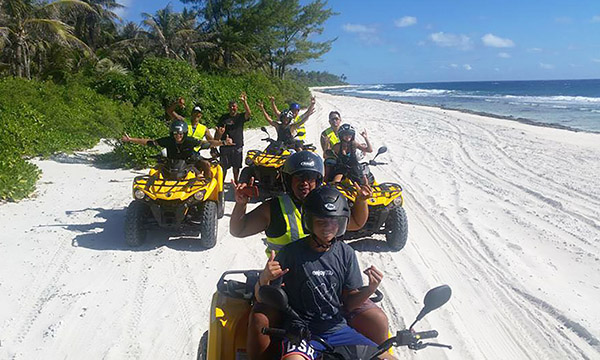 Explore Huahine's lush landscapes with an unforgettable ATV quad adventure. Begin with a test drive before exploring some of the most noteworthy sights of the island. Stops will include watermelon and melon fields, white sand beaches, the river with the sacred blue-eyed eels, ancestral fishing traps and ancient maraes with a refreshing stop for snorkeling in the lagoon. Drivers must be 18 years old with a valid driver's license. It is recommended that you bring sunglasses, a camera and a beachtowel. Operates: Everyday 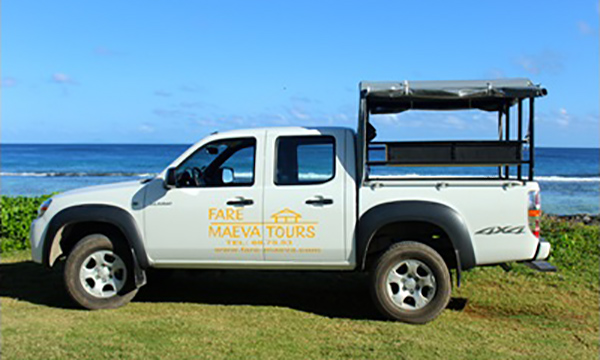 Enjoy a full-day adventure exploring Huahine by land and sea. Begin your day with a 4x4 island tour visiting ancient maraes, vanilla plantations, ancestral fish traps, and the town of Fare. After lunch, take off on a Jet Ski excursion of Huahine's lagoon with stops for swimming and snorkeling. 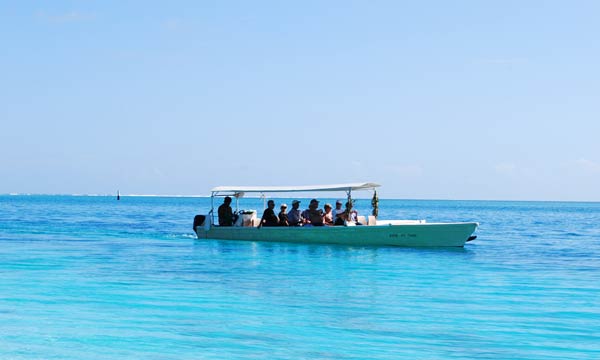 Start with a visit to the main village in Huahine, Fare. From there, you will tour the ancient Marae (archeological sites) followed by a visit to a vanilla plantation. Next, feed the sacred blue-eyed eels of Faie Village and then embark in an outrigger canoe to visit a pearl farm. You will then have the opportunity to snorkel in coral gardens and enjoy a motu picnic featuring the island's specialty, poisson cru, chicken, salads, fruit, and a selection of water, juices, punch, and beer. After the picnic you will tour the island by boat and visit a natural aquarium. Operates: Everyday 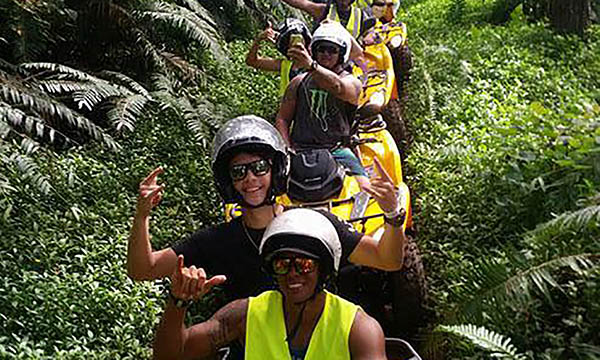 Explore Huahine in a thrilling and land and sea excursion. During your 3-hour ATV tour, you will traverse Huahine's tropical landscapes and discover hidden facets of the island's culture such as ancestral fishing traps and ancient maraes. After lunch, zip around the lagoon on a Jet Ski with stops for snorkeling and swimming. Drivers must be 18 years old with a valid drivers license. Operates: Everyday 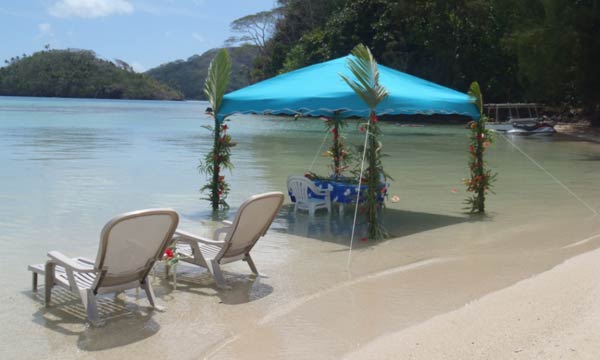 Enjoy a private picnic for two on the romantic island of Huahine. On this intimate excursion you'll have the opportunity to visit a pearl farm, chances to go snorkeling in coral gardens, and enjoy a private picnic on the water featuring the island's specialty, poisson cru, lobster, mahi mahi with vanilla sauce, salads, fruits, Champagne, wine, beer, juice, and water. Price per person based on two people traveling together. Operates: Everyday